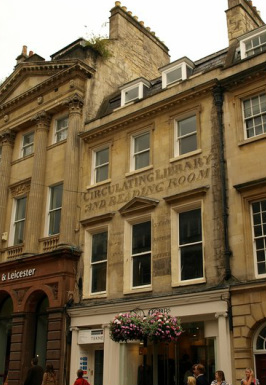 On this page, you will find some basic information about circulating libraries.  More in-depth information is provided in the “History” and “Mudie's Select Library” sections of this website.

What is a circulating library?

Where were they located?

Circulating libraries were used primarily by members of the middle and upper classes who had both money and leisure time.  Since these libraries did charge a fee, an individual had to have enough money to become a subscriber.  Furthermore, subscriptions were based on the number of books to be borrowed at one time, and it would be more expensive for every member in a family to subscribe or to borrow many volumes at once.  Both men and women subscribed to circulating libraries, and there is some evidence that children may have been subscribers too.

How much did a subscription cost?

A yearly subscription to a circulating library was relatively cheap, particularly when compared to the high price of books throughout this period.  According to Edward Jacobs, “Between the 1730s and 1842 the standard annual fee generally amounted to about double the purchase price of a normal three-volume novel of the time” (“Circulating” 6).  The annual fee decreased over time since “When Mudie’s Select Library opened in 1842, it undercut other libraries with a fee of only one guinea, which amounted to half rather than double the purchase price of a three-volume novel” (Jacobs, “Circulating,” 6).  This meant that a patron could potentially read hundreds of books for no more than the cost of two.  The image to the left includes the prices for a subscription to Mudie's in 1860.  While this price seems quite reasonable to us today, it was still much more than a working class individual could afford, and most patrons belonged to the middle and upper classes throughout the history of the circulating library.  In addition to the yearly subscription fee, patrons could face steep fines for late or damaged books.  According to Lee Erickson, the late or damaged fee was usually equal to the purchase cost of the book (580).

Circulating libraries were extremely popular during this period.  They allowed patrons to access more books than they could ever realistically afford: “The average three-volume novel cost a guinea in 1815, or, based on the current worth of a guinea's gold content, roughly the equivalent of $100 today; and that does not take into account how much lower the standard of living of the average person was then and therefore how many fewer people could afford to buy books” (Erickson 577).  The reasonably priced circulating library subscription allowed members of the middle class, particularly women, to start to read much more than they could if books had to be purchased outright.  Additionally, circulating libraries were popular as social destinations.  Fashionable people could meet at circulating libraries, and often these libraries offered additional leisure activities such as shopping and raffles.

How did circulating libraries make a profit?

First and foremost, circulating libraries were a business venture.  Proprietors had to make enough to continue to fund the enterprise, so many combined a circulating library with other businesses.  For example, Jacobs explains “Stationery and the sale of books and newspapers were the most common adjuncts, but libraries also frequently combined with trade in hats, medicines, teas, perfumes, and tobacco, as well as with barbering” (Jacobs, “Circulating,” 6).  Most circulating libraries also sold used books from the collection as well.  In addition to making money from subscription fees and side businesses, the fines imposed on borrowers could also amount to large sums.  It was common for the borrowing period to be less than a week, and fines could be as much as the purchase price of the book.  Circulating libraries were also able to make a profit by making deals with publishers to purchase books at a reduced cost, often 50% or more off the regular retail price.  For instance, a novel which sold for 9s in a shop would have cost a circulating library approximately 4s 6d (Skelton-Foord 351).

What was the reputation of circulating libraries?