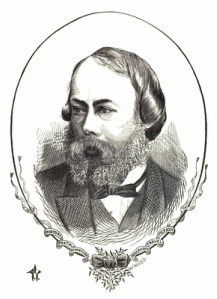 While the other pages of the website provide broad historical information about circulating libraries, this page presents my investigation of Mudie’s Select Circulating Library.  In particular, I am interested in the kinds of books that were available, especially children’s literature, to patrons of Mudie’s.  While some research has been published about 18th century circulating libraries and their children’s book collections, little research is available about Mudie’s and children’s literature.  Therefore, this page includes my conclusions after analyzing the 1860 and 1907 catalogs of Mudie’s.

I selected Mudie’s for further examination because most scholars agree that the library had an immense influence on the book trade during the 19th century.  The library was extremely popular, and by 1890 it had approximately 25,000 subscribers (Gerard 216).  This large number of patrons meant that Charles Edward Mudie (pictured on the left) had “substantial control over the publishing trade, since his libraries bought a large percentage of the books they sold, purchasing an estimated 7.5 million books over the course of the century” (Jacobs, “Circulating,” 8).  Mudie’s even played a part in making novels successful: “A listing in Mudie's selection had become one of the best advertisements for any novel” (Griest 107).
Mudie’s control over the book trade even extended to the content of novels.  Mudie’s gained a reputation for only purchasing books which conformed to Victorian norms and values.  As Griest explains, Mudie’s acted as “paternal protectors” who assumed that “the public did not want books which questioned the generally accepted Victorian standards” (116).  Mudie’s was able to get away with this kind of censorship, and “it controlled the subject, scope, and morality of the novel for fifty years” (Landow).  This kind of influence is difficult for us to imagine when we consider the principles of selection and collection development which current libraries use.  Furthermore, we can picture contemporary patrons objecting to this careful control of the “morals” of what makes it into the library collection.  However, Mudie’s made it quite clear to patrons that books had to meet specific standards to appear on their shelves.  On the second page of the catalog from 1860, the following statement appears:

Not only then were works of “objectionable character” left out of the collection, but so were works of “local interest” which would surely take a prominent place in contemporary public libraries.  With concerns about the content and morality of the novels they purchased for adult readers, one can imagine that children’s books were subjected to more stringent guidelines.

An examination of Mudie’s catalogs from 1860 and 1907, however, reveals that children’s literature was absolutely an important part of Mudie’s collection and business.  The catalog from 1860 includes 16 pages of books (roughly 550 titles) from the “Juvenile Department” (229-244).   By 1907, the children’s books had expanded considerably.  Instead of a single alphabetical list of offerings, the “Books for Juvenile Readers” are divided into five categories: nonfiction, fiction, boys, girls, and young children.  Furthermore, the 1907 catalog has 34 pages (about 2,000 titles) devoted to children’s books (726-760).  Some of the titles from both catalogs include:  Charles Dickens’s Christmas Books, Maria Edgeworth’s  Moral Tales, and Lewis Carroll’s Alice’s Adventures in Wonderland.  A page from the 1907 catalog is also included below to provide an example of nonfiction juvenile titles in the collection. 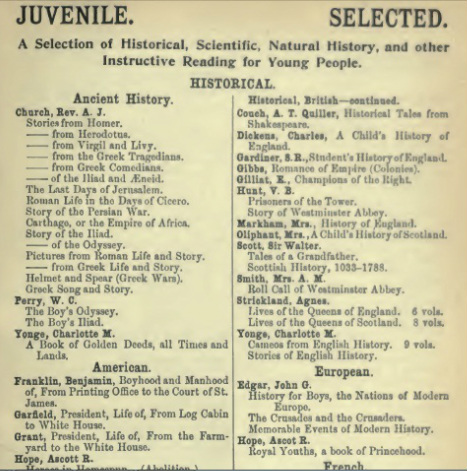 Additionally, the 1907 catalog offers “Special Terms for Juvenile Readers” (725).  This meant that children could become members of the library in their own right and could borrow from one to six books at a time depending on the subscription which was selected.

Why then did Mudie’s cater to children when Grenby reports that circulating libraries from 1748 to 1848 were wary of young patrons and stocking too much children’s literature?  I would argue that Mudie’s presentation of itself as a “select” library which carefully monitored books and only incorporated those deemed morally acceptable meant that they finally made it safe for children to go to the library.  Parents did not have to fear that their child would get their hands on morally suspect books if they went to Mudie’s.  This conclusion is reinforced by the preface to the 1907 catalog which includes the following information about the children’s books available:

"For the Juvenile reader a specially selected list of some two thousand books is given at the end of the Catalogue ; this selection comprises instructive reading in History, Science, and Morals, suitable for the young, together with Stories arranged under topics to suit boys and girls of all ages" (iv).

Clearly, Mudie’s advertised their children’s books as being “specially selected” and “suitable for the young,” and these claims probably went far to dispel parents’ fears about the safety of the reading material at Mudie’s (iv).  Furthermore, a juvenile subscription at Mudie’s meant just that, a subscription for juvenile books only.  In fact, the terms for the juvenile subscriptions clearly state: “For Books Selected from the Juvenile Section Following.”  Not only then were books monitored for their moral content, but parents could also be sure that children were only given access to books from the children’s section.  What Mudie’s demonstrates is that by the middle of the 19th century circulating libraries had become more open and acceptable for all members of the family.  Today we may be critical of censorship based on the judged morality of a text, but that kind of selection made Mudie’s both well-known and safe for readers of all ages.