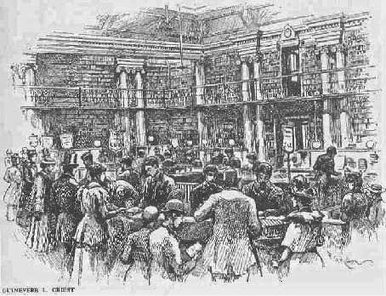 On this page, you will find an overview of the history of circulating libraries from 1725 to 1966.

Before the 18th Century

There is some evidence that a few circulating libraries may have been in operation during the latter half of the 1600s.  For example, Edward Jacobs notes that “In the 1660s, the bookseller Francis Kirkman advertised that he rented books, as did one Widow Page in 1674” (“Circulating” 5).  However, it was not until the 1700s that these businesses became popular and began to multiply all over Britain.

This period was also important to the development of the circulating library because some important innovations were introduced.  These innovations included extensive advertising and establishing franchises.  Again, the Minerva Press Circulating Library provides an example.  Not only did the library advertise, but Lane also “offered to franchise provincial circulating libraries, providing them with ready-made stock” (Jacobs, “Circulating,” 5).  Encouraging the development of franchises meant that the circulating library moved into smaller communities that may not have otherwise had the service available.

By the 19th century, circulating libraries had become well-established in British culture.  They provided consumers with reasonably cheap access to the must read novels of the day.  Furthermore, they quickly became engrained into the lifestyle of individuals with money and leisure time.  For instance, they “became fashionable daytime lounges where ladies could see others and be seen, where raffles were held and games were played, and where expensive merchandise could be purchased” (Erickson 576).  More significantly, they also allowed women the opportunity to read on a scale that was not seen before, and provided “a means for the intellectual liberation of women of small means” (Erickson 577).

During the 19th century, the two biggest circulating libraries in operation were Mudie’s Select Library (1842-1937) and W.H. Smith and Son (1860-1961).  Mudie’s was known for offering a large selection of books which had been screened, or selected, for their adherence to Victorian morals.  W. H. Smith and Son began with book stalls in railroad stations, and they used trains to effectively expand their distribution of books.

The 19th century also marks the period during which circulating libraries had a huge influence on the novel and its developments.  In the 18th century, circulating libraries began publishing novels by women, and they were responsible in large part for popularizing the gothic novel during the last decade of the 18th century and first few decades of the 19th.  In fact, “the definitive texts of the gothic genre were published almost exclusively by circulating-library publishers” (Jacobs, “Anonymous,” 617).  Later in the 19th century, the circulating library was largely responsible for popularizing the three volume novel.  When a novel was published in three parts, it meant that the library could divide a book between three patrons, and they could charge more for patrons who wished to borrow all three volumes at once.  In addition to popularizing certain types of fiction, these libraries “made reading fashionable” (Erickson 573).  Without circulating libraries, it is doubtful that novel reading would have become such a popular leisure activity during the 19th century.

Surprisingly, circulating libraries survived well into the 20th century.  Mudie’s Select Library was in operation until 1937, W. H. Smith until 1961, and Boots BookLovers’ Library until 1966.  The downfall of circulating libraries can be mainly attributed to two things: free public libraries and cheap books.  First, free public libraries started to develop in Britain after an 1850 act of parliament; however, it took until early in the 20th century for the public libraries to take off.  Secondly, well into the 19th century books were expensive and beyond the means of many middle class families.  However, cheaper books, particularly paperback books, meant that the middle class consumer was finally able to afford buying many books each year (Jacobs, “Circulating,” 9).  With these new options, the circulating library was no longer necessary or profitable.